Alexandros Maganiotis and his Cross-Disciplinary Counterpoint

Athens-based visual artist and architect Alexandros Maganiotis is constantly mixing up elements of tradition, architecture and pop culture in his pointillistic collages. I first came across his work many years ago, when he was exhibiting his “Alphabet” series at Kinitiras Studio, an experimental dance and theatre venue in Koukaki. Today, the same series is on display at the National Art Museum of China in Beijing, as part of an exchange between the Greek National Museum of Contemporary Art and the 7th Beijing Contemporary Art Biennial—and in the meantime, Alexandros has been producing new work constantly parallel to his architectural projects. In the following interview, we talk about his signature pointillistic style, his love for vintage Athenian architecture and the area of Monastiraki, where his studio is based.

Over the past few years you have developed a technique that we could say is becoming very recognisably yours. Tell us how you began working with paper, collage and pointillism, and the way this technique has evolved.

Well, collage is the first step of the creation process, and I think I have a fixation with collage for as long as I can remember myself. Even as a teenager I would cut images out of magazines and stick them together, and cover practically everything: from my schoolbooks to the walls of my room. So I use collage as a base for the work, which then I draw with markers using my own version of pointillism or “dottism” to create the final piece. This technique I use now has evolved naturally through the years; it originates from the drawing methods I was taught in Architecture, specifically from the dotted line and the layering of the tracing paper that we use in technical drawing. Now I draw free-hand but the structure is always visible.

One of your very first series was the Alphabet, which is currently on display at the National Art Museum in China. What is the concept behind these zoomorphic figures and how do they relate to each letter?

The Alphabet from (Alpha to Omega) is a set of 24 drawings, one for each of the twenty four letters of the Greek alphabet. In every drawing a letter triggers a word, usually an animals’ name. The images derive from collages, where animals’ heads pop-out of clothes or even shoes. Thus new hybrid creatures are formed taking their characteristics both from the human and the animal.

Most of your work references Greek mythology and tradition. What is the reason behind you mixing the past with the myths with the present?

Over the last decade I have travelled and shown my work in various countries, and this interaction made me wonder what is my place as a contemporary Greek in this global environment. Through my work I try to investigate issues that deal with my own identity, my background, roles I have to play in my everyday life and how these are being formatted by my family, or imposed by society in general. Anything can initiate a work: an old family photograph, a piece of literature or ancient Greek myths like the Odyssey. I work with them in a personal way, so for example the travels of Odysseus where transferred to contemporary Athens.

Your studio is in Monastiraki, which is the most touristy area of Athens. What kind of hidden beauties are there in Monastiraki that only a local would know about?

This question links to the previous one in the sense that the area | live and work in functions as an inspiration, it is very lively but what I like most is this feeling of creativity that floats in the air. All these shops where you can find fabrics, beads, threads or tools and crafting materials are an inspiration. Furthermore what makes this area unique for me personally, is the childhood memories it contains; I inherited my studio from my grandfather, along with his name, so I used to visit Monastiraki from very early on.

In your more recent work there’s a strong reference to pop culture. Could you say why you find these references attractive or expressive? Are you after a particular aesthetic or is it something else?

This particular work [Double Life of Superman, 2017] was made for a show at Skoufa Gallery in Mykonos, which is becoming more and more of a global tourist attraction, and the concept was to mix pop art elements with my work. I always liked comics and superheroes, so I had this idea that contemporary comics could find their ancestors in pottery painting where there is always some writing and a story involved. So the series comics & ceramics was born. I think at the end of the day, art is always about communication, so let’ s say Superman can work as a reference to attract the tourist’s gaze and possibly make him want to explore more my work.

You are an architect by trade, and much of your work is influenced by local architecture. How would you describe Athenian architecture and what makes Athens unique as a city in that respect?

What makes Athens interesting for me is this amazing layering of history, from the ancient to the Byzantine, the neoclassical and the mid-war period buildings all coexisting in the most unexpected way. In a way the city is un-planned or it has so many plans juxtaposed one on top of each other, creating a unique energy that is full of surprise—sometimes good or sometimes not so pleasant.

I studied in Athens, so part of my training was to see a lot of local architecture, and I learned to love the inter-war era and 1970’s modernism. These days as a practitioner I try to respect the history of the place or the building itself, but usually I design the interior. It is very rare to receive a commission to design a building from scratch.

As an artist you also curate the shop window displays of Be Seen optics in Athens. What are the challenges of displaying art in a commercial context, and how do you choose the theme for each installation?

Some years ago I was invited by Be Seen to create visuals for their window display. I always liked the idea to make of a shop window that would stand out of the ordinary. I was given total artistic freedom to create whatever I wanted, with the only guideline being to communicate a message, and this really linked with my work which almost always contains text. The theme of each installation comes as a reaction on current affairs—it can comment or propose an escape from the everyday.

Alexandros Maganiotis is currently participating in the exhibition Right to the Future in Saint Petersburg, Russia, and at the 7th Beijing Biennial of Contemporary Art, China. 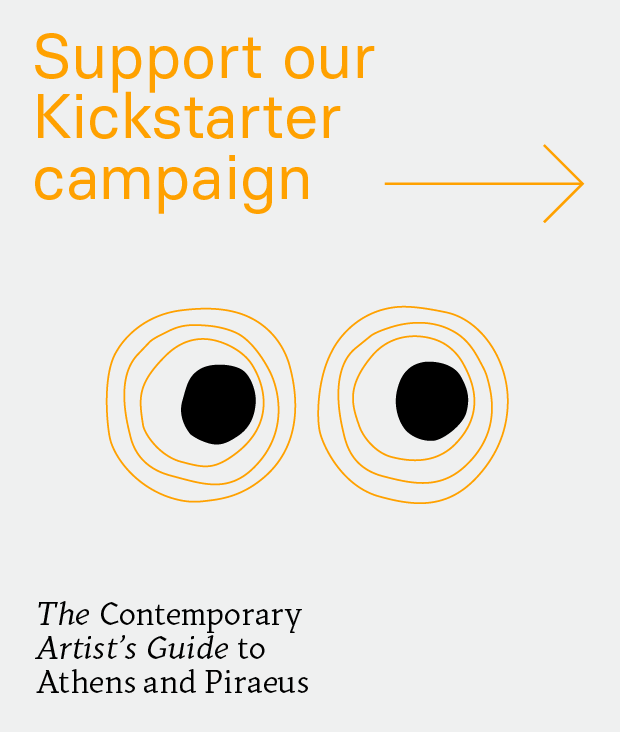